Amina Shabani is 17 years old and lives at home with her mother, grandmother and brother. She completed public school through Standard 7, which would be approximately equivalent to 5th grade in the United States. Her mother works in the fields around the village to provide for the family. Amina would like to own her own business in Mbuguni when she completes Next Life Foundation tailoring school.

Irene Jacob is a 15 year old who lives with her parents, a younger brother and a younger sister. Irene’s parents are farmers and have some land of their own but there has been no rain in Mbuguni for over three years so they have been forced to work for others who have irrigation. Irene heard about Next Life Foundation through talk in the village. She loves to sew and would like to work for herself someday in the city.

Monica Michael is 18 years old and attended public school through Standard 7. Her mother died in childbirth when her twin sisters were born. Her father is also deceased. She and her sisters live with their grandparents. Monica always wanted to study tailoring and dreams to be a skilled artisan who creates girls designs. She would like to learn computer skills to complement her tailoring.

19 year old Paulina Wilson completed Form 2 in school (approximately 7th grade). Her mother passed away and her step mother didn’t want her to continue her education. She would like to save up the money she earns from her self-employed tailoring business to go back to school. Paulina brings a spark of fun with her wherever she goes!

Jesca Tito is 13 years old and finished Standard 7 before she found her way to the tailoring school. She doesn’t have any siblings and doesn’t know the whereabouts of her mother. She lives with her grandfather. Jesca always wanted to learn some sort of vocation but wasn’t sure what; then Next Life Foundation was born in Mbuguni. She enjoys sewing and also cooking. She could always be found helping with the noon meal while the guests from the US were visiting.

Dalvina Elirehema is the 3rd child of six. She lives at home with all her siblings and her parents. Dalvina is 14 years old and finished Standard 7 in the public school system in Mbuguni. Her mother always promised her that she could go to a vocational training school to learn tailoring. Her favorite part as she lives out this dream is the instruction and learning. When her tailoring course is finished she’d like to take another course in English. Dalvina thinks she might like to be a tailoring instructor someday.

Salma Msafiri is a 15 year old who completed class 8 in Kenya (equivalent to 9th grade in the US) but had to leave school due to financial struggles. There are seven in her family and it became too expensive for her family to pay for all the school fees for all the children. Salma loves tailoring and wants to open her own business in Mbuguni plus teach locals the trade in order to help others. She dreams to learn English so she can sell her goods in other countries.

Theresia Bryson is a middle child in a family of six children. She is 20 years old and went to public school through Form 4 (equivalent to 11th grade). She lives at home with her mother, father and siblings. English and computer are skills Theresia would like to learn so she could someday own her own business and also teach tailoring somewhere outside of Mbuguni.

Since Fatuma Juma’s parents are separated, she and her 3 younger siblings live with their grandfather in Mbuguni. She is 20 years old and the chosen “leader” of the tailoring girls. She completed school through Form 3 (10th grade) but had no funds to continue. Fatuma is just anxious to work. She would be happy to work for someone or be self employed. She just wants to get out of Mbuguni and work! She would like to learn some business skills to go along with her tailoring.

Neema Benjamini is 18 years old and lives with her grandparents and her 5 year old son. Her parents are deceased and her son has not started school due to lack of money for school fees, shoes, books, uniform, etc. Before starting tailoring at Next Life Foundation, Neema had only seen people working at sewing machines but had never touched a machine. She loves making things and hopes to someday have her own business in Mbuguni.

14 year old Halima Jumanne is the 3rd child of six children and lives at home with her mother, father and siblings. She completed Standard 7 in the public school system in Mbuguni. When she completes her training in tailoring she hopes to move to a large community and have the ability to make anything!

Hadija Iddi is 17 years old and lives at home with her mother, an older sister and an older brother. She always wanted to be a tailor. She would really like to learn more about design so she can develop her own style of clothing and produce it.

Halami Ramadhani is 17 years old and lives at home with her mother and 3 brothers. She finished Standard 7 school in Mbuguni. She would like to learn some computer skills so she can be a BIG designer some day and move to Paris, France!

Janeth Malaki is an 18 year old that has 4 brothers and 2 sisters and lives with her uncle. She attended school in Mbuguni and finished Standard 7. Before beginning her training at Next Life Foundation Jannette was working in the fields in the area. She would like to learn more about farming and computers. Someday she would be interested in being self employed somewhere other than Mbuguni.

16 year old Failuna Hassan Failuna Hassan went to public school through Standard 7 in the village of Msitumbogo. She lives at home with her mother and father. She has an older brother and two older sisters. She always wanted to go to a VoTech school to learn tailoring so was very happy when Next Life Foundation opened their doors in Mbuguni.

Husna Saidi is a 17 year old who is planning to find a job in tailoring when her training is complete, so she can save her money to open her own business in a community outside of Mbuguni. She would like to learn more about design so she’s able to create her own styles. Hussna lives at home with her parents and grew up with two brothers and two sisters. She completed Standard 7 schooling in Mbuguni.

Emima Manase is a 20 year old living at home with her parents and five siblings. She attended Mbuguni Secondary School through Form 2 but missed the passing score by one point to continue to the next level. Her next goal was to learn tailoring. She would like to learn design to go along with the tailoring. After mastering these skills she’d like to learn Hotel Management. Her dream would be to do custom design tailoring in a hotel setting.

Elizabeth Paulo is a 28 year old mother of two. She lives with her husband, Jackson, and her 5 yr old and 1 yr old daughters. They tragically lost a child a few years ago in a drowning accident. Her husband had been doing casual work in the area to support the family but with the 3 year drought he was finding it harder and harder to find work. He is now staying home with the children while Elizabeth learns the skill of tailoring. Their 5 yr old daughter is not attending school due to the fees, etc. Owning her own business is a dream that Elizabeth is striving for. She looks forward to supporting her family.

25 year old Veronica Shababani is a wife and mother of one son. Before starting training at Next Life Foundation she was a stay at home mom but she wants to help support her family financially. She would like to learn more about design so she can come up with her own styles of clothes. With a Standard 7 education Veronica has big dreams to move away from the village of Mbuguni and own her own business.

Ester Patrick was born in a village called Msitu wa mbogo (Hippos forest), which borders the village of Mbuguni. She finished standard seven at Msitu wa mbogo primary school and she passed her standard seven examinations. The Government assigned her to a government secondary school but Esther was forced to leave school at form two (9th grade) due to her heart problems. When her schooling ended, her hope of a better life disappeared until she heard of NLF. She dreams of opening her own tailoring store in Arusha and supporting herself and her family. 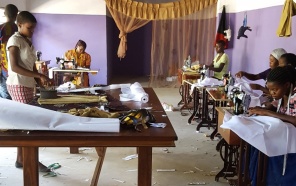